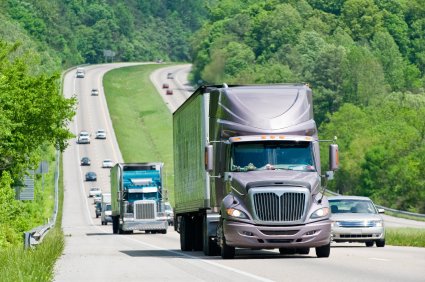 One of the victims involved in a 10-vehicle accident on Interstate 26 just outside of Columbia last week claims he is lucky to be alive. Charles Watson told WIS-TV: “I look in the rear-view mirror, and there’s just a giant fireball coming at me… I was along for the ride. It came and hit me hard and pushed me forward.” Watson, like others that fateful morning, was headed to work when he was caught behind a three-car crash in the interstate’s left lane. He was attempting to pass the scene when out of nowhere a tanker truck carrying 8,500 gallons of fuel smashed into the back of his Ford SUV.

He watched in horror as his Ford Explorer was quickly engulfed in flames. “I just took my seatbelt off and bolted over the console and out the door. The whole ground was on fire,” said Watson, who was barely able to escape the fiery inferno through the passenger door. The fire swiftly spread to several other cars that were stalled on the highway between exit 104 and 106.

Investigators say the cause of the crash is still not known, but has confirmed that multiple motorists were transferred to local hospitals for burn-related injuries. Watson suffered second-degree burns on his leg and arm during the crash, and told reporters of the searing pain he felt as the flames licked at his body. Thankfully, no fatalities were reported.

How a SC car accident lawyer can help

Claims arising from automobile accidents are a specialty of The Jeffcoat Firm, serving Lexington & Richland County residents for nearly two decades. Under South Carolina law, those who have suffered property damage and personal injuries in car accidents resulting from another’s negligence may have a viable claim for monetary compensation. With aggressive representation from an experienced South Carolina car accident lawyer at our firm, plaintiffs can attempt to secure damages for medical bills, lost income, pain and suffering and other accident-related losses.

Car crash victims and the surviving loved ones of those who died in accidents face an uphill battle frequently complicated by inconclusive investigations, legal issues and insurance companies that are only interested in keeping their payouts to a minimum. For this reason, it’s imperative that effective and competent legal representation is procured immediately in the wake of a traffic accident, leaving nothing to chance.

By partnering with seasoned SC injury attorneys, car accident victims can help ensure that their best interests are protected and that fair compensation will be pursued, whether through an insurance settlement or court award.

Injuries and fatality in SUV rollover

Investigations into multi-vehicle accidents such as the I-26 wreck are likely to drag on for weeks as authorities comb over the accident scene, gather eyewitness testimony and analyze other potential contributing factors. “When you look at upwards of 10 vehicles involved in a collision, several of them were completely engulfed, so it’s something that’s going to take some time to investigate, and it’s something that we’re not going to rush,” said Lance Cpl. David Jones of the SC Highway Patrol.

Charles Watson told WIS news that emergency responders shared their amazement that no one was killed in an accident of such proportions. But not all motorists are so fortunate.

An earlier car accident on Highway 151 near Jefferson, SC, seriously injured two people and left one dead after the driver of an SUV lost control of his vehicle. The SUV flipped over and rolled several times before coming to rest. Twenty-one year old Aiyana Nicole Boyd, of Charlotte, NC was confirmed dead at the scene. Authorities say the driver of the SUV may have fallen asleep at the wheel, though this has not been confirmed.

Here at The Jeffcoat Firm in Columbia, SC, we believe that your future depends on what you do today. If you live in the Lexington or Richland area and have been involved in a car accident, we are here to make sure you don’t become a victim twice.  Our team of highly credentialed attorneys has successfully handled claims regarding SUV rollovers and roof crush injuries, wrongful death actions and accident cases involving trucks and commercial vehicles.