Study commissioned by The Jeffcoat Firm

Did you know there’s one traffic fatality every ten hours in South Carolina?

We have been helping victims of South Carolina traffic accidents every day for over 20 years. We commissioned this study to help make our roads safer.

“I’ve spent over two decades handling traffic accidents and fatality cases and this finding was shocking to me,” says Jeffcoat Firm founder, Michael Jeffcoat. “The loss of life is absolutely tragic. I’ve been with families in the aftermath of thousands of accidents and every time this happens it’s a big, big deal.”

Despite the shocking statistics, the first half of 2020 was comparably low for traffic fatalities in South Carolina compared to the same time period in previous years, which could be linked to the COVID-19 pandemic discouraging road travel this year. The month of June, however, saw the most deaths (114) which coincided with a spike in traffic following the lifting of COVID-19 restrictions.

Just 10 counties in South Carolina saw 50% of the traffic accidents:

The 10 roadways with the most fatalities were as follows:

The Hardest Hits Roads and Counties 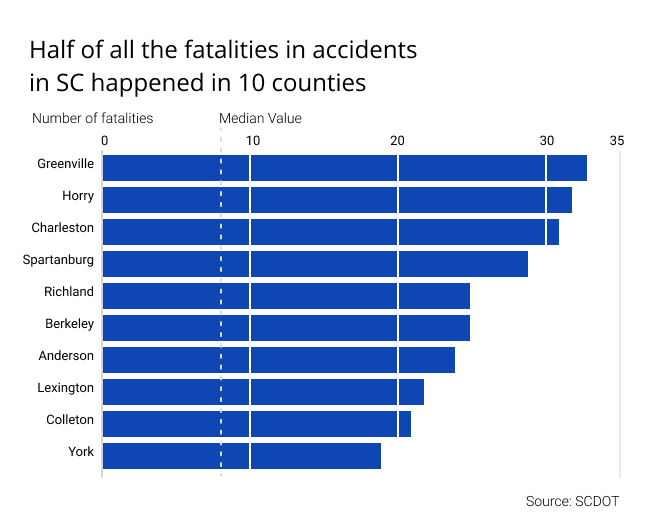 Colleton County proved to be home to the most lethal roads in the state, with I-26 and US-17 seeing 25 and 24 fatalities respectively.

“A lot of people think that I-95 is bad for fatalities, but I-26 and US-17 substantially outpace what you see along I-95,” says Jeffcoat.

“I think a lot of people would be surprised to see that I-95 isn’t number one. People think that traffic facilities are primarily a phenomenon that happens on the Interstates, but the data doesn’t always bear that out. Back roads and rural roads can be more deadly, in part because people don’t take them as seriously as they would consider a ramp onto an interstate,” he adds. 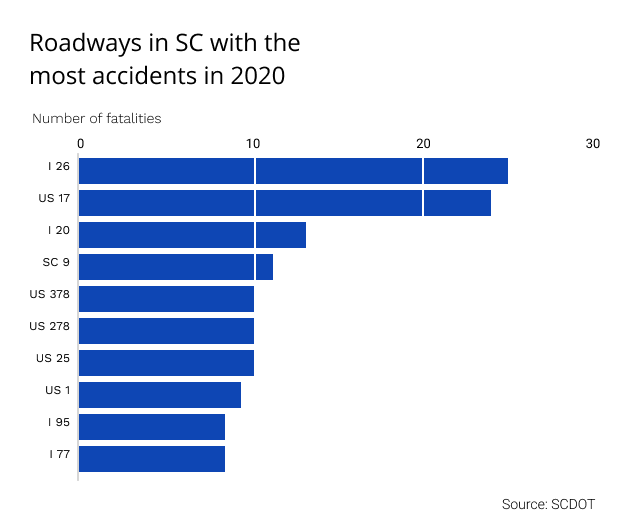 I-26 runs from Charleston up to a point just below the Tennessee-Virginia state line and tracks south-easterly through South Carolina. It’s famed for its ‘Malfunction Junction’; six lanes which intersect with I-20 in Columbia – which the study ranked as the third worst hit road. State officials have said that safety improvements to this area of the interstate will begin in 2021. 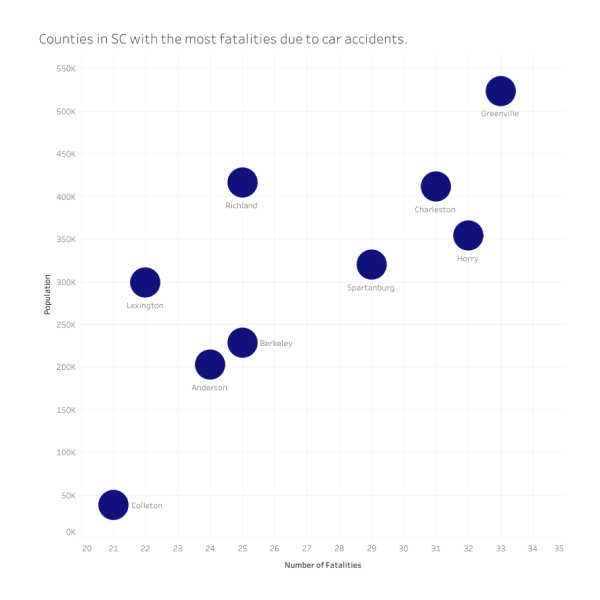 Readers perhaps won’t be surprised to see the most populous counties featuring on the list, but the counties with a much lower population density – such as Colleton – have proved to have very lethal roads, too.

“I-95 and US-17 both run right through Colleton County – it’s not very populous so has less residents, but it’s somewhere people go to get through to Charleston, Edisto Island or the Hilton Head area. Especially this year, that’s where people have been going for their vacations,” says Jeffcoat.  “People need to get away even during a pandemic. There are tons of houses, condos and hotels down there, and the pandemic may have brought more traffic through during the first half of 2020 that wasn’t there in prior years.”

“Distracted driving is very under-reported because after an accident, people aren’t going to self-report to law enforcement that they were texting, FaceTiming or doing a dance for TikTok instead of fully concentrating on the road. You rarely have a witness in the car with the careless driver who will independently verify what the driver was doing. You almost have to have been in the car to know if the driver was distracted.”

There are three kinds of distracted driving:

“This is why texting and fiddling with your phone is so deadly: it involves all 3 kinds of distractions.

“I advise my own family members to put their cell phone in the back seat so they can’t absentmindedly reach for it while they drive because it will be too far away,” says Jeffcoat.

The Jeffcoat Firm study has provided the following interactive ‘crash map’, which highlights the state roads that have proven the most dangerous thus far in 2020.

Road usage is gradually returning to the level seen before the COVID-19 lockdown was in place, with visits to parks, retailers, grocery and pharmacy all slowly increasing.

“To improve the roads in South Carolina, law enforcement needs more resources and funding so they can do their jobs – we need to get more troopers on the roads, and people need to wake up and recognize that we have a problem,” says Jeffcoat.

“Completely innocent people have lost their lives, and the lives of their families have been changed horribly forever. We need to make sure roads are designed safely and constructed so that people have a safe place to drive.”

For more information about this study and for interview requests please contact:

About The Jeffcoat Firm

The Jeffcoat Firm serves residents of South Carolina and handles all types of Injury Cases.

The Jeffcoat Firm is a different kind of place – a law firm where your attorney will look you in the eye, give you honest, frank advice, and be genuinely concerned about both your case and your own well-being. We understand that you want to be treated fairly, you want your case to be handled and concluded quickly and efficiently, and that you want the compensation you deserve to cover your losses.